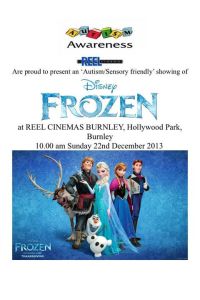 Just got back from watching the new Disney film `Frozen` at Reel Cinema Burnley. This was an Autism/Sensory friendly showing of the film which had benefits of lighting being kept on during the film, lower sound and no trailers/adverts at the start of the film. This was the first time we had been to a special showing normally we just battle it out at the normal film showings, but just these tiny adjustments really helped this morning.

Being a parent of a child with special needs is really important to be able to see your child and the lighting being kept on was great for this as well as being beneficial for the children. The atmosphere felt a lot more calmer, this could have been down to the children not being as over stimulated as normal and also knowing that you are in a very understanding environment with other parents who wont judge.

The film was lovely and just in time for Christmas, Christmas can be such a hard time for children on the spectrum…even us normal (if you can call anyone normal) people feel the buzz of the christmas rush with all the planning and unorganisation! Routine goes out of the window, rooms/environments look and feel different with all the stimulating decorations and also the understanding and making sense of what christmas is about…..a man called Father Christmas just comes into your house while you are sleeping and leaves you presents…..even i still cant get my head around that!!!!

Anyway back to the cinema, i would highly recommend going to see an Autism Friendly showing if you have a child on the spectrum or even suspect they maybe. They don’t need a diagnosis or a statement just go along to your local cinema and see when they are doing them. I think most companies are supporting these showings now, but i have to say a big Thank You to Reel Cinema Burnley this morning for being so supportive. 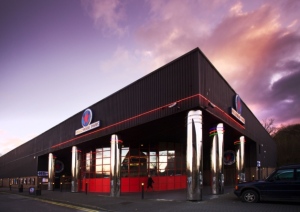